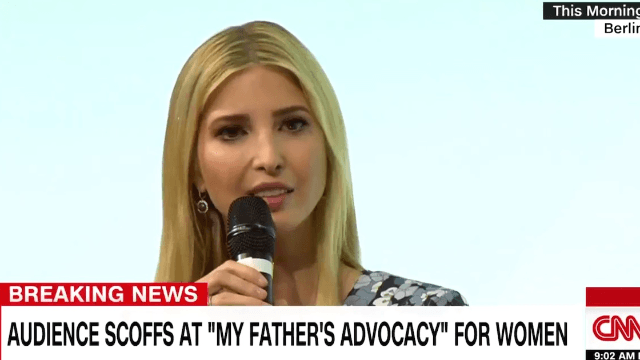 Ivanka Trump gets booed in Germany and awkwardly tries to recover.

The Germans were very confused why she was there.

New York magazine reports that Ivanka Trump was asked real questions right out of the gate.

“You’re the First Daughter of the United States, and you’re also an assistant to the president,” the panel’s moderator, Wirtschaftswoche editor-in-chief Miriam Meckel, opened. “The German audience is not that familiar with the concept of a First Daughter. I’d like to ask you, what is your role, and who are you representing, your father as president of the United States, the American people, or your business?”

“Certainly not the latter,” Trump said. “I’m rather unfamiliar with this role as well … It has been a little under 100 days and it has just been a remarkable and incredible journey.”