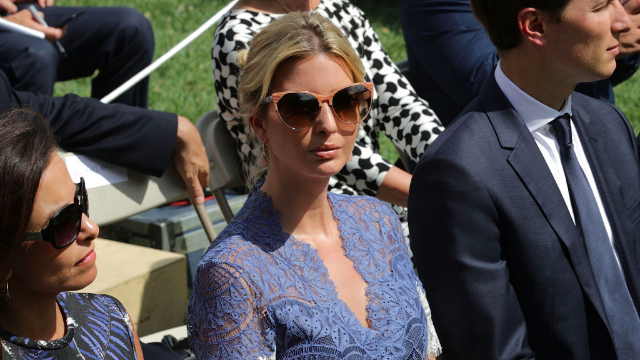 Ivanka Trump hopes people will lower their expectations of her. Twitter doesn't know if that's possible.

Ivanka Trump is just one woman. One woman with an empire of knock-off footwear made by poorly paid Chinese workers who make $62 a week, at a sweatshop where activists investigating human rights abuses sometimes go missing. One woman with the ear of the president, who happens to be her father. Who sometimes sits in at big, important meetings with world leaders while Daddy is off doing other things. But she is just one woman. She cannot do everything. Especially when "everything" entails keeping her father from being terrible.

Which is why she would like you, the American people, to lower your expectations of her.

Meanwhile, [Ivanka] desperately wants to lower expectations of what she can achieve in an administration where she views herself as one person on a large team — even though other White House officials said she still has access to the president whenever she desires it. Allies have bucked up her spirits by telling her that her legacy will look better in hindsight if she is successful in moving the needle on her stated issues. And as she navigates the unique role of working-daughter-in-the-White House, she is reading Eleanor Roosevelt’s biography for guidance and inspiration.