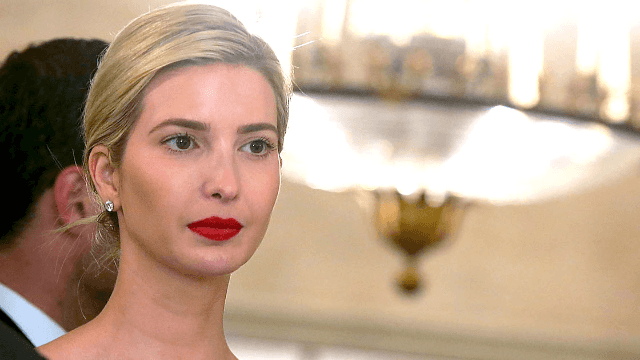 Everyone is shook that Ivanka Trump wore an outfit even we could afford.

This latest news from the Trump clan could be the most shocking yet: Ivanka Trump, heir to the Trump throne, appeared in public wearing an outfit even us commoners can afford.

This is NOT fake news: the first daughter and known bajillionaire was recently seen walking around D.C. in a $35 dress from Target, the New York Post reports. Let me reiterate: Ivanka Trump shops at Target. Is nothing sacred?????

The black, knee-length dress with a ruffled bottom and "calla lily applique," whatever that means, is from Victoria Beckham's line for Target. And it's since been marked down to $17.50—a price that even you and I could afford.

We have so many questions: is Ivanka okay? Is she making a statement? Is this a cry for help? Is daddy not paying her enough?

This article in Business Insider suggests that Ivanka is intentionally "dressing down" in a move to "distance herself" from her stepmother Melania Trump, who made headlines recently when she appeared wearing a Dolce & Gabbana jacket that cost $51,500 dollars, which is more than many of us earn in a year.

Eric Schiffer, the CEO of Reputation Management Consultants, told Business Insider he thinks Ivanka's Target dress was intentional. "The dress picture says 'I don't necessarily want to be associated or aligned with the Trump administration,'" he told Business Insider. "It shows that she is doing things that are asynchronistic, or not connected to Trump's actions."

Ivanka has been known to wear some "tone-deaf" outfits herself, like when she posed in a $5,000 gown the day after her dad signed his first controversial executive order to ban Muslims from entering the country. So yeah, it's a little hard to believe that all-of-a-sudden she's just casually shopping for deals at Target like it's NBD.