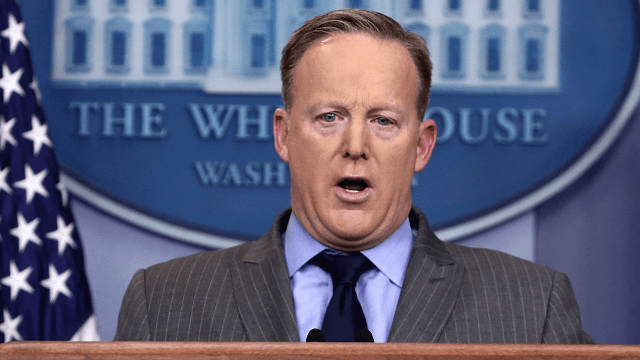 Sean Spicer hid in the bushes to avoid speaking to reporters about James Comey's firing.

On Tuesday night, White House Press Secretary Sean Spicer attempted to avoid a horde of reporters by literally hiding in the bushes on the grounds of the White House, according to the Washington Post. The reporters were clamoring for answers about President Donald Trump's bombshell firing of FBI Director James Comey.

Cut to: earlier the same day. Apparently, Spicer wanted to put the news into an email press release, according to the Post. But when that didn't happen fast enough, at around 5:40 p.m., Spicer ended up standing in the doorway of the press office, yelling a statement of sorts to any media who happened to be around. Then he disappeared into his office.

The Post reported that the White House press office staff initially said Sean Spicer would possibly do a briefing, but then stated that he wouldn't be saying anything else for the night. However, as the sudden firing came under increased scrutiny from both Democrats and Republicans, Spicer and two spokeswomen walked up the White House driveway to defend Trump on CNN, Fox News, and Fox Business.