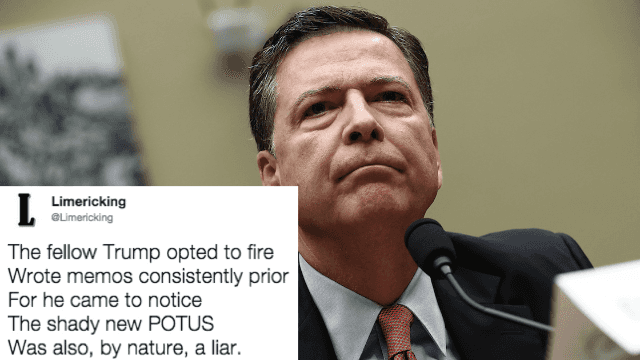 Here are the best tweets from James Comey's hearing, aka the 'political Super Bowl.'

Pour yourself a large cup of covfefe: it's Comey Day.

Former FBI Director James Comey's testimony before the Senate Select Intelligence Committee was yuge, in terms of unpacking whether or not President Donald Trump committed obstruction of justice in asking Comey to ease off of the Russia investigations and former National Security Advisor Mike Flynn. Billed as "Washington's Super Bowl" by CNN, James Comey's testimony is also a big day for the Republican spin machine, who are tasked with having to defend Trump's actions.

The fellow Trump opted to fire
Wrote memos consistently prior
For he came to notice
The shady new POTUS
Was also, by nature, a liar.