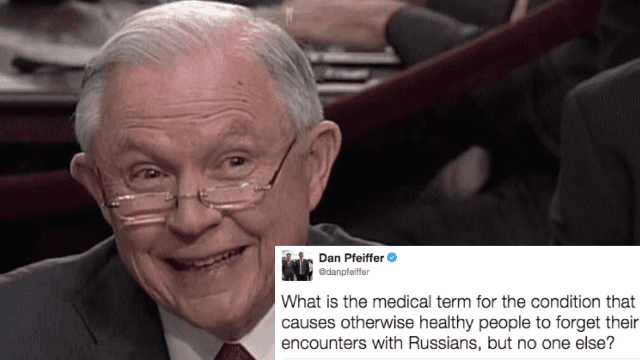 Attorney General Jefferson Beauregard Sessions III has been summoned before the Senate Intelligence Committee to discuss Russian intervention in the 2016 election, the inquiry into which he was supposed to recuse himself from. Despite obstensibly recusing himself, Sessions was involved with the firing of James Comey, which as Trump blurted out, happened because of the Russian investigation.

Like Donald Trump, Sessions himself has sketchy interactions with the Russians, having met with Ambassador Sergey Kislyak not one, but twice, and maybe even thrice (!!!), about which he lied to Congress during his confirmation. Lying under oath to Congress, according to the law, is also known as "perjury," but we are clearly past the point where laws or anything matters anymore.