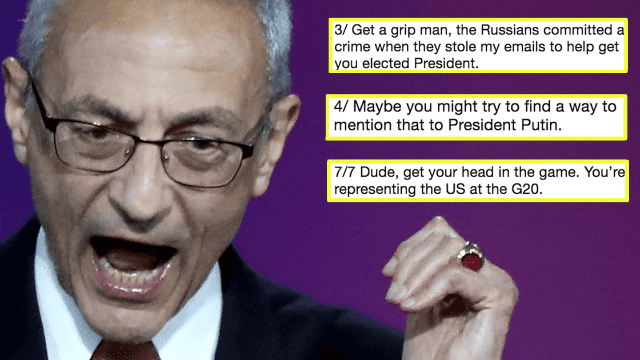 Target of Trump's morning Twitter tirade lashes back: 'Get a grip.'

On Friday morning, Donald Trump rolled into the G20 meeting in Germany. He did not leave his Twitter account behind.

Everyone here is talking about why John Podesta refused to give the DNC server to the FBI and the CIA. Disgraceful!

The subject was John Podesta in connection with—surprise!—Hillary Clinton. Podesta was Clinton's campaign chairman. During the 2016 election, Podesta's hacked emails leaked, leading to some terrible headlines for Clinton.

Later on Friday, John Podesta happened to check his phone—surprise! He proceeded to join the rest of Twitter in mocking Trump, with no less indignation than you'd expect from a guy currently on family vacation who thought his disastrous 2016 election was finally behind him.