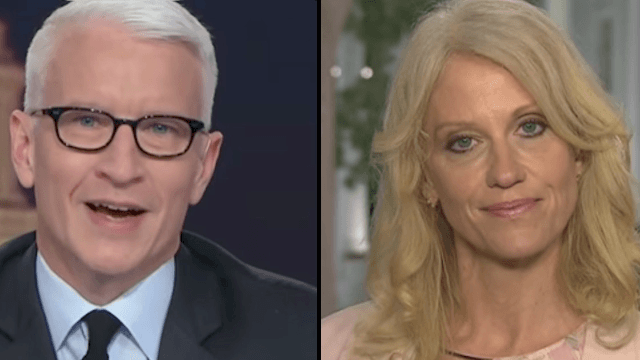 Revel in the glory of Anderson Cooper openly rolling his eyes at Kellyanne Conway.

After a little hiatus from appearing on TV, Kellyanne Conway is back to defend the president no matter what he does, says, or tweets.

Conway appeared on CNN with Anderson Cooper to talk about the firing of FBI director James Comey on Tuesday, and it didn't take long for things to get pretty heated.

According to Conway, Trump decided to fire Comey due to his treatment of Hillary Clinton during the 2016 campaign, which, COME ON, no one actually believes. Obviously, Anderson Cooper wasn't buying it either.

"But this is stuff that as a candidate, Trump praised James Comey, he talked about this on the campaign all the time. All of a sudden, the White House is concerned about James Comey’s handling of Hillary Clinton’s emails?" Cooper asked Conway. "Why now are you concerned about the Hillary Clinton email investigation when as a candidate, Trump was praising it from the campaign trail?"