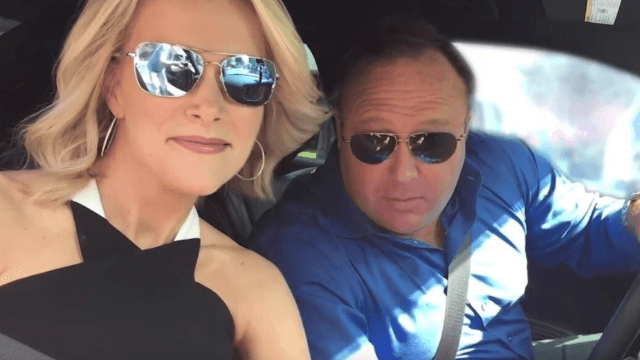 Everyone is pissed Megyn Kelly is palling around with the guy who thinks Sandy Hook is a hoax.

Megyn Kelly is under fire for her decision to sit down with Infowars host and conspiracy theorist Alex Jones. The reveal prompted criticisms, especially from the bereaved parents of students in the Sandy Hook, Connecticut, shooting, which Jones believes was a conspiracy exacerbated by the media to target gun owners, and has previously denied ever happened.

Next Sunday, I sit down with conservative radio host @RealAlexJones to discuss controversies and conspiracies #SundayNight June 18 on NBC pic.twitter.com/7bVz6Fobf5

As Vox points out, Jones' penchant to spread misinformation makes him unworthy of a sit-down interview. Aside from the risk of lying to and offending the general public, the interview has struck a deep chord with families of Newtown, who are often harassed by truthers. "You do NOT give crazy a platform. You're better than this @nbc," Nelba Márquez-Greene, mother of slain daughter Ana Grace, wrote on Twitter.