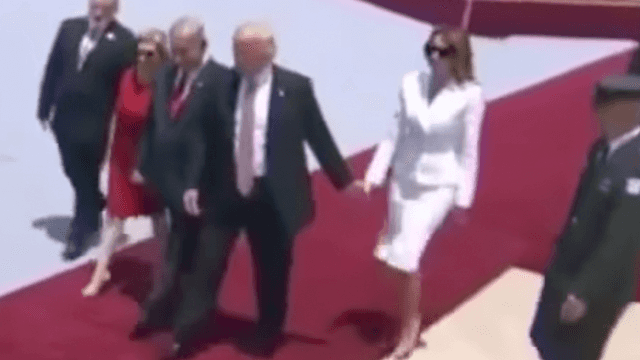 Melania Trump bats away Donald's attempt at intimacy in video destined for viral hall of fame.

President Donald Trump arrived in Israel on Monday. During a stately walk down the tarmac, First Lady Melania appeared to bat away his attempt to hold her hand.

In case you missed the weekend, Donald Trump's currently on a world tour, and he definitely brought his hands.

That was a mistake, because Trump's hands always get him in trouble when he's around world leaders. Like when he lingered too long on the Japanese prime minister. Or when he refused to touch Angela Merkel. Or when Justin Trudeau bested him at his own game.

Then there's the fact that people go wild whenever Melania Trump's shows disdain for her husband, real or imagined.