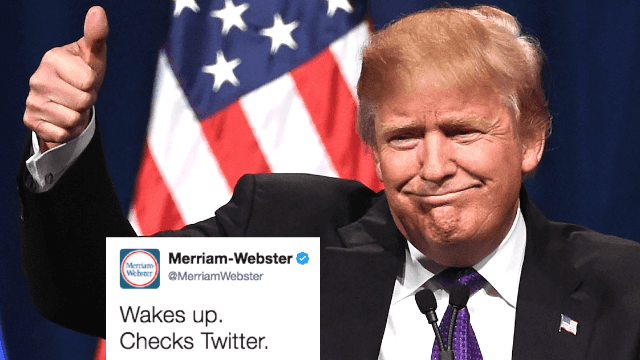 Merriam-Webster's Dictionary just spoke for all of us with their response to 'covfefe.'

Merriam-Webster's Dictionary had a rough night last night. As did much of America, as we lay awake, tossing and turning trying to figure out what "covfefe" means.

After President Donald Trump (we still can't believe it either) tweeted out an incomplete tweet with a glaring typo last night and then promptly went MIA for the rest of the night, many of us were left wondering if something had happened to him or if it was simply another clumsy miscalculation from a consistently clumsy, miscalculating president.

So of course, everyone looked to our favorite dictionary and tool of the #resistance, Merriam-Webster's Dictionary. But this new word #fail was too much even for Merriam-Webster, who have been brilliantly trolling the president and his cabinet since long before he took office. They took to Twitter at 1 am, in the midst of #covfefegate, and tweeted this: