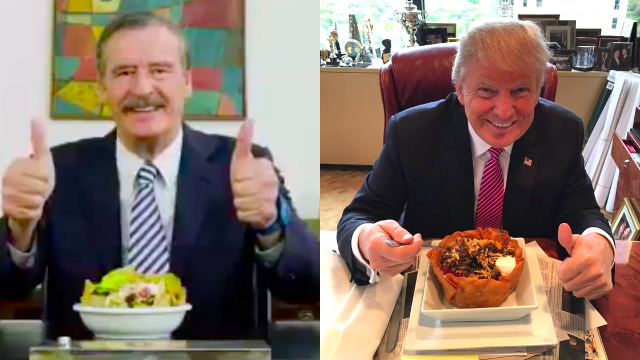 Today's episode of "world leaders trolling the US president" comes to us from below the still wall-less border in Mexico. Former Mexican president Vicente Fox has trolled President Donald Trump in a hilariously salty video, chock full of f-bombs, attacking him for his plan to "make Mexico pay" for the border wall. He also hits the president where it hurts: his taco bowls.

Much like a taco with extra salsa picante, this one is going to sting.

You can watch the glorious statement here:

Dear @realDonaldTrump: Here's a friendly reminder from @VicenteFoxQue that Mexico will not pay for your wall. pic.twitter.com/Osg8ZUYLlG

"Mexico will not pay for the fucken wall," begins Fox in the video, holding up a sign to affirm his point. He continues:

Hola, Donald. It is me, Vicente, coming to you from Mexico, where the best taco bowls are made. Actually, these are shit. They are not even Mexican. Why is the bowl made out of tortilla? Just eat a fucken taco. At the former President of Mexico, I want to speak directly to you, the current President of the Electoral College of the United States, because we need to get something straight between our two countries. And it isn't going to be a fucken wall. Donald, under no circumstances will we pay for this stupid, useless, racist monument.