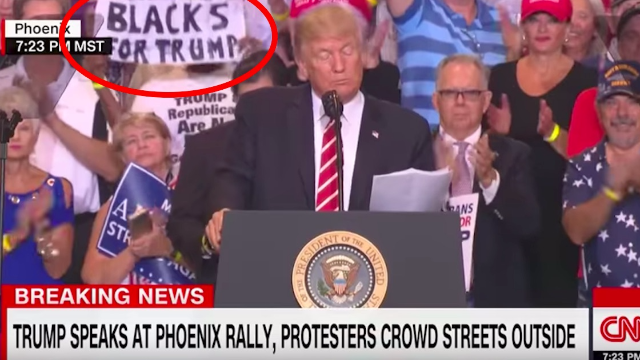 The internet can't stop talking about the 'Blacks for Trump' guy and his 'interesting' backstory.

At President Donald Trump's rally on Tuesday in Phoenix, AZ, the internet became fixated with a one particular guy on stage behind Trump. Yes, I'm talking about the "BLACKS FOR TRUMP" sign guy.

Viewers of Trump rallies may recognize the man, who calls himself "Michael the Black Man" (apt, easy to remember), as someone frequently seated behind Trump at rallies, holding up a sign that yells "BLACKS FOR TRUMP" and wearing a T-shirt that claims "TRUMP & Republicans Are Not Racist.” Because if you have to put it on a T-shirt, it's definitely true.

Michael's shirt also advertises his website, God2.com, which directs users to another one of his websites, HonestFact.com, the home page of which features a link to information about the "ISIS & HILLARY RACE WAR PLOT TO KILL ALL BLACK & WHITE WOMAN OF AMERICA." I mean, that's certainly a take.