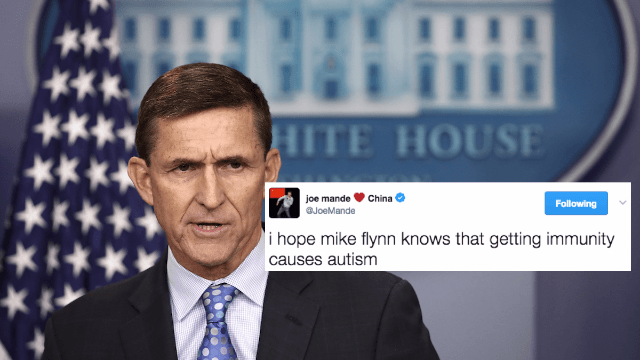 This just in: Former Trump advisor Mike Flynn wins Snitch Of The Year award for offering to testify about the Republicans' contact with Russia, as long as he's granted immunity from prosecution. (Hint: That mean's he's probably committed some crimes he doesn't want to go to jail for.)

The statement, which was issued on Thursday night by Flynn's lawyer, doesn't list specific terms, the New York Times reports, but includes that "no reasonable person, who has the benefit of advice from counsel, would submit to questioning in such a highly politicized, witch-hunt environment without assurances against unfair prosecution."

And while experts have cautioned onlookers from reading too much into Flynn's demand for immunity, we know that Flynn at least had several phone conversations with a Russian ambassador last year, and that he misled White House officials about that fact. And obviously, the first thing Twitter is going to do is read into it. Here are some of the funniest initial reactions to the news that Flynn is ready to 'fess up, provided he doesn't have to suffer for it.