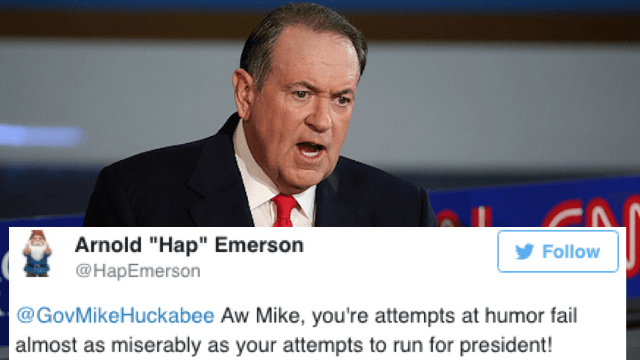 Former Arkansas governor and current blathering old man Mike Huckabee likes to make jokes on Twitter. There is only one problem— he really sucks at it.

In his latest attempt, Huckabee tweeted out this purposely distasteful "joke" about Cinco de Mayo, a Mexican holiday that commemorates the Battle of Puebla on May 5, 1862.

For Cinco de Mayo I will drink an entire jar of hot salsa and watch old Speedy Gonzales cartoons and speak Spanish all day. Happy CdMayo!

Okay, so Huckabee is very obviously trying stir up controversy with broad stereotypes about Mexicans for no other reason than to just be an ass. Makes you long for the good ol' days when politicians at least pretended not to be racist, doesn't it?

Luckily, people on Twitter (who are actually funny) had some pretty good rebuttals to Huckabee's unfunny tweet:

stick to celebrating your people's culture of wearing khakis from Sears and taking rights away from minorities.