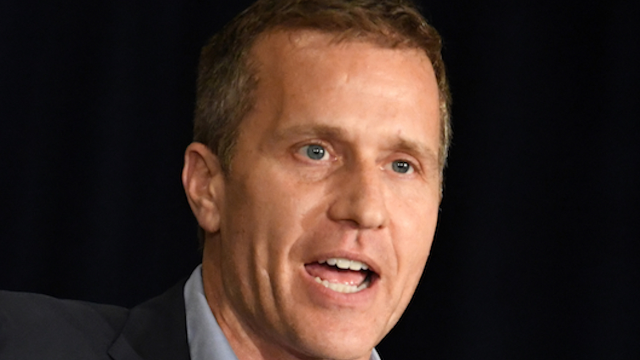 Married Missouri governor allegedly took a racy pic of his mistress for blackmail.

On Wednesday, KMOV reported that the married governor of Missouri, Eric Greitens admitted that he was having an affair. He allegedly used a racy picture to try to blackmail his mistress into keeping quiet about it. Greitens and his wife Sheena issued a statement, saying, “Eric took responsibility and we dealt with this together honestly and privately.”

KMOV obtained a recording in which a woman says she had a sexual interaction with Greitens, and that he threatened to blackmail her. The woman's ex-husband provided KMOV with the tape and other details, saying the relationship between his now ex-wife and Greitens took place in March 2015, and that Greitens took a picture of her during the encounter to possibly use later for leverage.

The woman was recorded unknowingly by her now ex-husband. On the tape, the woman apparently says Greitens committed "horrible and disgusting" actions. While she was allegedly blindfolded, she saw a flash, and knew that Greitens had taken a picture of her. He reportedly told her, "You're never going to mention my name, otherwise there will be pictures of me everywhere."