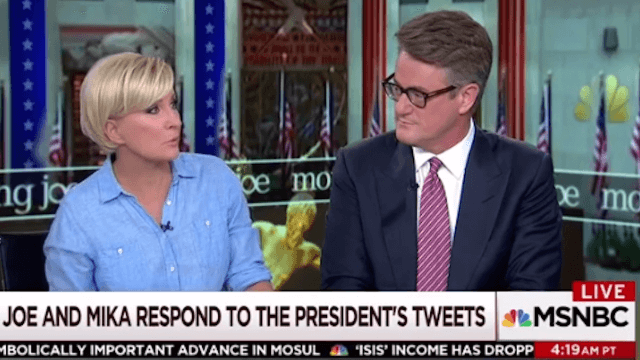 The National Enquirer just released a story about an alleged cheating scandal involving engaged Morning Joe co-hosts Joe Scarborough and Mika Brzezinski. It comes on the tail of an ongoing feud between President Donald Trump and the MSNBC hosts, which is largely taking place over Twitter (because of course it is) and their TV show.

On Thursday, Trump tweeted some rude and sexist tweets about the couple, particularly about Brzezinski 'bleeding' from a 'face-lift.' Scarborough and Brzezinski responded today by writing an op-ed published in the Washington Post today.

That the tabloid chose to run the story today isn't particularly surprising, given the current conflict between Trump and the MSNBC hosts. In the op-ed, the couple claimed that "top White House staff members warned that the National Enquirer was planning to publish a negative article about us unless we begged the president to have the story spiked. We ignored their desperate pleas."