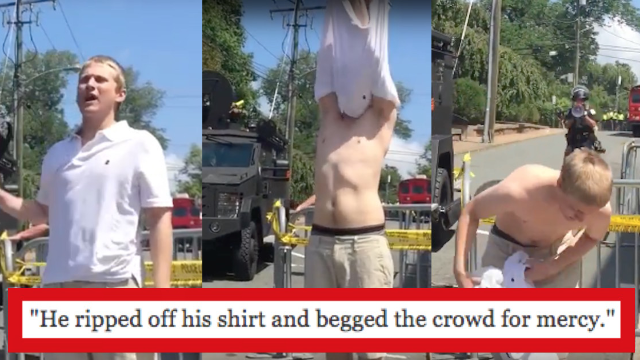 Terrified Nazi in Charlottesville strips off uniform and runs when sh*t gets real. It's all on film.

Filmmaker CJ Hunt arrived in Charlottesville, Virginia on Friday, to film a segment for his documentary on Confederate monuments, he writes in an op-ed for GQ. He ended up arriving in Charlottesville on the eve of the "the largest white supremacist rally in decades," he writes.

We all know how that went down, with hundreds of neo-Nazis marching, wielding lit tiki torches and chanting racist slogans like "blood and soil," culminating in violence and the murder of a counter-protester.

Hunt covered much of it, and says "nothing troubled me more than when I watched a Nazi disappear." Apparently, one of these Nazi protesters suddenly had a change-of-heart (if he even has one) when he realized people were filming and photographing the march. So in a last ditch effort to protect his identity, he stripped off his white power uniform (bearing insignia of white nationalist group Vanguard America) and tried to make a getaway. Hunt followed him, camera in hand, writing: