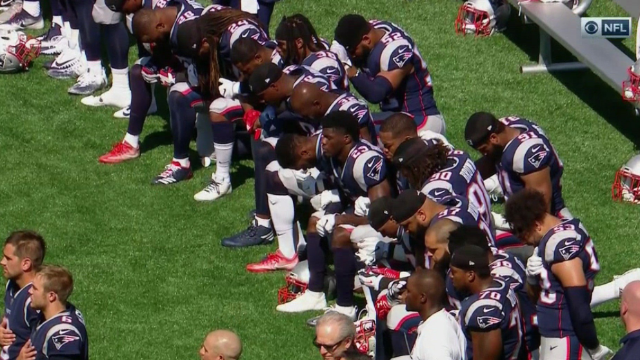 Here are all the ways NFL players protested after Trump called them 'sons of bitches.'

Thousands of Americans have developed a newfound interest in football thanks to a new battle brewing between the NFL and (who else?) our President.

At a rally in Huntsville, Alabama on Friday, President Donald Trump railed against national anthem protests and insulted the NFL players who dare (*eyeroll*) express their constitutional right to free speech on the football field. "Wouldn't you love to see one of those NFL owners, when somebody disrespects our flag, to say, 'Get that son of a bitch off the field right now, he's fired. He's fired!'"

On Sunday aka gameday, the teams had an opportunity to respond — and they all did. Some teams chose to take a knee during the national anthem, others linked arms, some sat on the bench, and more. Here's what a day full of those great American pastimes — football and free speech — looks like.