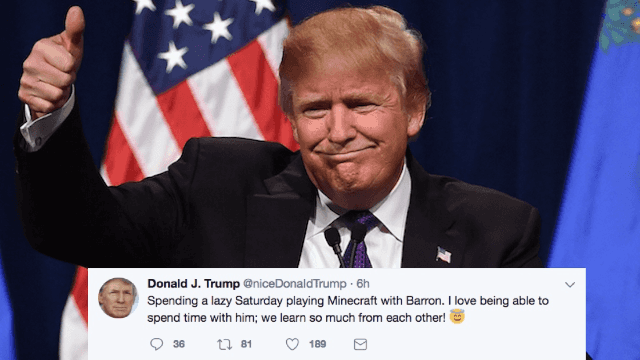 It seems like every day, there's a new crazy Twitter rampage from president Donald Trump that everyone needs to talk about. Feel like you could use a break from the president's Twitter shenanigans? You're not alone.

@niceDonaldTrump is a Twitter account that imagines what Trump would be tweeting if he were super nice. The account's bio reads, "Tweets from a normal, well-adjusted President. Most likely a parody."

We know the tweets aren't real, but it is kind of nice to imagine a world where Donald Trump is downright pleasant to everyone and has daisies as his Twitter banner.

Let's get to know Trump's delightful alter-ego, shall we?

He loves spending time with his family.

Spending a lazy Saturday playing Minecraft with Barron. I love being able to spend time with him; we learn so much from each other! 😇