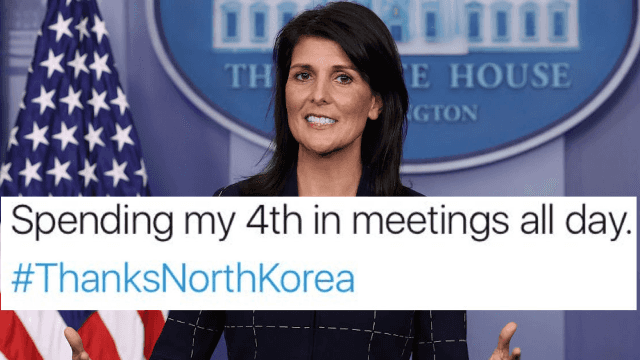 U.S. Ambassador Nikki Haley complained on Twitter about having to work on July 4th. Big mistake.

No one likes to work on holidays, but sometimes you just have to suck it up and do what you gotta do—especially when you are literally the person responsible for dealing with foreign countries, including those pesky hostile ones with dangerous missiles, like North Korea.

On Tuesday, U.S. Ambassador to the United Nations Nikki Haley tweeted that her Independence Day was ruined after she got stuck in meetings following North Korea's latest missile test.

Spending my 4th in meetings all day. #ThanksNorthKorea

Ugh, isn't it just the worst when you have to miss the fireworks to prevent those potentially deadly North Korean "fireworks" from raining down on the country you supposedly love? Hopefully those meetings were worth missing the BBQ, Nikki!