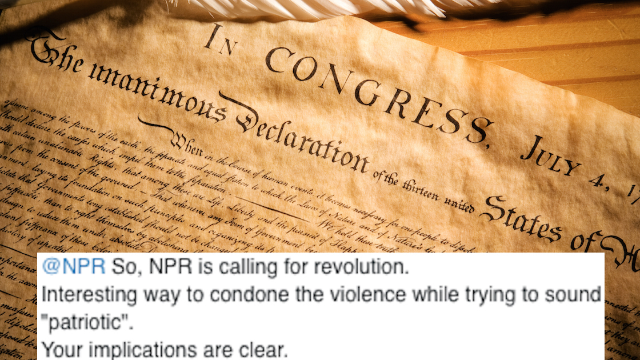 NPR tweeting the Declaration of Independence confused a lot of Trump supporters. Like, A LOT.

On July 4th, the National Public Radio (NPR) Twitter account continued their yearly tradition of tweeting the entire Declaration of Independence in a series of over 100 posts to their feed.

We won't post the entire thread, but here is a sample:

The most retweeted segment of The Declaration was this line:

A Prince whose character is thus marked by every act which may define a Tyrant, is unfit to be the ruler of a free people.

Hm. We wonder why.

Anyway, most would argue that the annual post is an undeniable act of patriotism, but this year NPR's account was under attack from Trump supporters who accused the radio station of trying to start a coup: