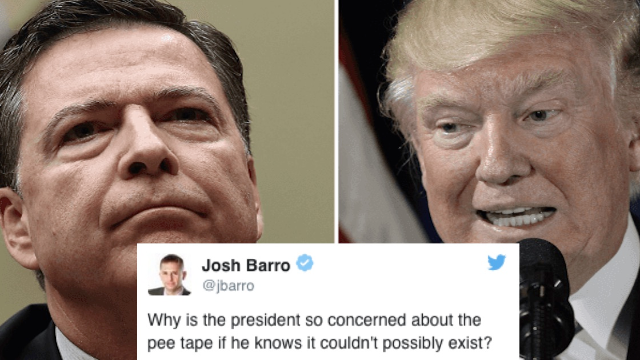 People are freaking out that James Comey’s testimony alludes to the pee tape.

Oh, and one other pee-ticular detail stands out. Comey wrote:

On the morning of March 30, the President called me at the FBI. He described the Russia investigation as “a cloud” that was impairing his ability to act on behalf of the country. He said he had nothing to do with Russia, had not been involved with hookers in Russia, and had always assumed he was being recorded when in Russia. He asked what we could do to “lift the cloud.” I responded that we were investigating the matter as quickly as we could, and that there would be great benefit, if we didn’t find anything, to our having done the work well. He agreed, but then re-emphasized the problems this was causing him.