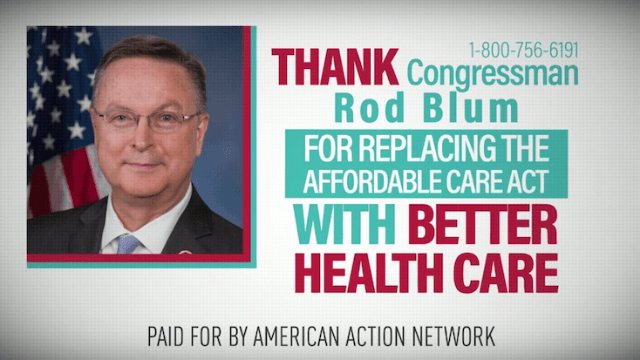 Political ads thank Republicans for replacing Obamacare just hours after they failed to do so.

For now, Trumpcare is dead. The Obama-era health law it was supposed to replace is still the law of the land. Republicans, despite control of the White House and both sides of Congress, and with President Trump acting as party whip, couldn't even pull themselves together to vote on their garbage bill.

So if you were watching some college basketball last night and saw a commercial thanking your Republican representatives for repealing Obamacare, you probably did a double take. Because didn't that... not happen?

This ad and several others like it, tailored to specific markets and representatives, aired courtesy of the conservative American Action Network PAC, which is either wasting its money or really doubling down on the whole "fake news"/"alternative facts" angle. Because the sad thing is, you know at least some people who watched these commercials totally believed them.