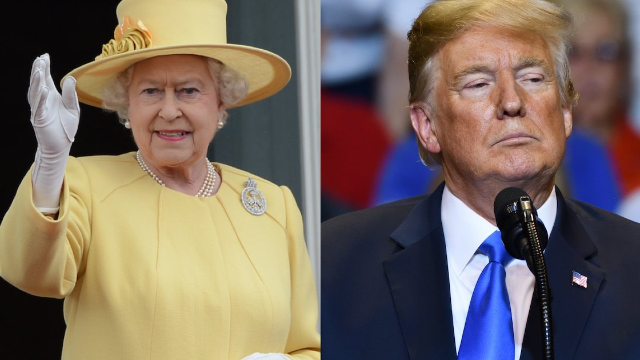 The Trumps arrived in the UK yesterday. And it seems the entire bloody country came out to "welcome" them with a Trump baby balloon, no red carpet, a whole lot of side eye, and even a giant dick! The display of brilliant pettiness was a sight to behold. This giant USS John McCain baseball cap was the cherry on top:

Hey @realDonaldTrump, we read the story about the sailors on a US warship being ordered to hide from you because you’re triggered by the name on their hats. So we turned Madame Tussaud's into a giant USS John McCain baseball cap. Welcome to London! pic.twitter.com/KuynOwupFm

And if the internet theories are to be believed, the Trump trolling reached royal levels. Last night, the whole Trump family was invited to a state banquet hosted by the Royal Family. The outfit was black tie, prompting a hilarious meme about the President's absurdly over-the-top tuxedo.

But all eyes were on Queen Elizabeth, who is known to be intentional in her outfit choices, choosing her clothing and accessories to convey specific messages.