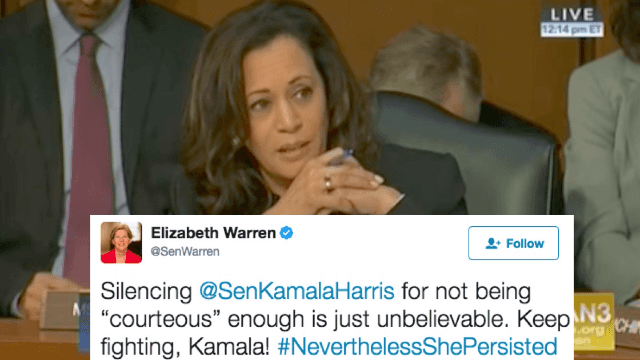 Two male senators tried to silence a female senator and Twitter is not having it.

Harris asked Rosenstein a yes or no question about whether he’d write a letter giving Robert Mueller, the special counsel who will lead the investigation into any collusion between the Trump campaign and Russia, the independence to investigate without the any possible bias from Rosenstein.

According to Slate, Harris was first interrupted by Senator John McCain (R-AZ), who asked committee Chairman Richard Burr (R-NC) to stop Harris' questioning. Well, Rosenstein continued to skirt around answering Harris' question, and this time it was Burr who interrupted her, using his authority as chair to demand that she “extend the courtesy for questions to get answered." So, because she's a woman, her line of aggressive questioning was seen as rude.