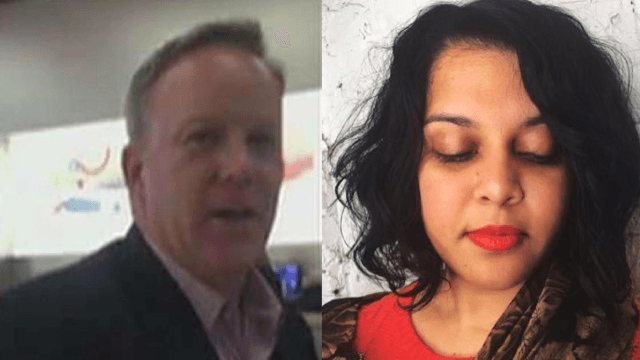 Woman confronts Sean Spicer in Apple Store: 'How does it feel to work for a fascist?'

On March 11, White House press secretary Sean Spicer was shopping at the Apple store* when he was approached by a woman who had a few questions for him. The woman, named Shree Chauhan according to the NY Post, tweeted a video of the question/no answer session along with the text, "Asking @PressSec questions in Apple Store since he doesn't like the press."

Asking @PressSec questions in Apple Store since he doesn't like the press. https://t.co/l493z2gG4x

Her post has since gone viral, getting over 400,000 views on the video app Periscope. Chauhan wrote about the experience on Medium, and said that Spicer made a racist remark to her while she was filming.

Chauhan asked Sean Spicer questions like, “How does it feel to work for a fascist” and “Have you helped with the Russia stuff?” He initially replied “We have a great country, but mostly seems to be trying to ignore Chauhan.