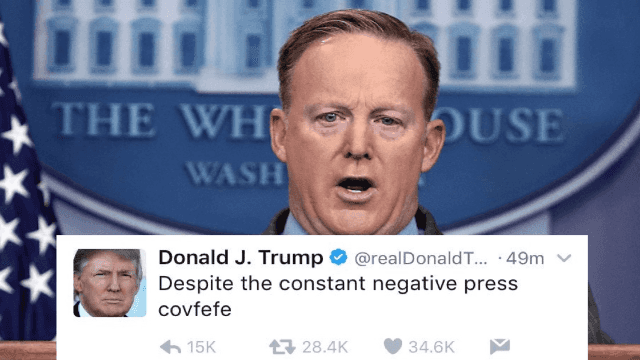 Sean Spicer's job as White House press secretary is to stand up at a podium to lie and defend President Donald Trump every day, and has already served up some all-time classics like "Not even Hitler gassed his own people" and "This was the largest audience to ever witness an inauguration, period."

As the dude responsible for translating Trump's confusing words and even more confusing deeds to the public, he has committed to defending the indefensible and to live by the Trumpian maxim of "Never admit to making a mistake." Spicey's latest, greatest lie brings us back to the most powerful typo in the world, which just might not be a typo after all.

Spicer went on the record, at the White House, to declare that Trump's nonsensical viral tweet that confused the world and stayed up for hours was not actually a mistake.