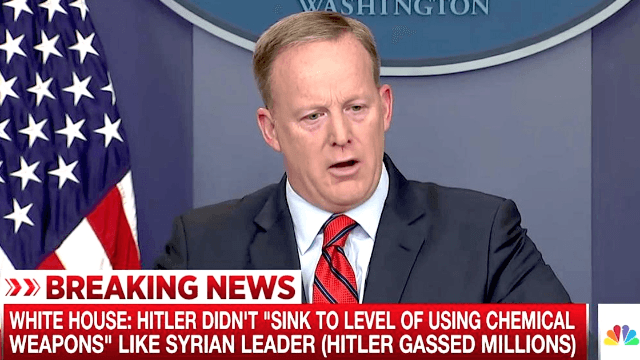 During a press conference at the White House on Tuesday, Press Secretary Sean Spicer once again invited the jeers of the internet by making a poorly-thought-out comparison between Syrian President Bashar al-Assad and OG Nazi Adolph Hitler.

Spicer: "You had someone as despicable as Hitler who didn’t even sink to using chemical weapons." —via @MSNBC pic.twitter.com/512wfBOoq5

Referring to Assad's use of gas in an attack that killed dozens, including children, last Tuesday, Spicer said that even someone "as despicable as Hitler" didn't "sink to using chemical weapons." Spicer seemingly forgot that Hitler did use chemical weapons, specifically gas, to execute millions of Jews, Romani, homosexuals, and handicapped people during the Holocaust. Luckily, the people of Twitter were there to remind Spicer of his little oopsie.