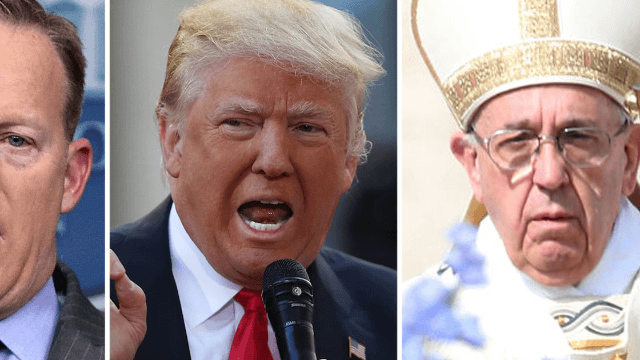 On Wednesday, Donald Trump met with Pope Francis—while Sean Spicer fumed that he didn't get an invitation, according to CNN.

"Spicer assumed he would be on the list," according to an unnamed "administration official," who said the Catholic Spicer has a "bucket list" of things he wants to do as press secretary.

On that list? Meeting the Pope. Not on that list? Being mocked mercilessly for wearing the wrong tie. Guess which one he's checked off so far?

What happens when u wear a green tie on TV 😭 pic.twitter.com/gAohulqeck

At the papal meeting—attended by Melania, Ivanka, Jared Kushner, Secretary of State Rex Tillerson and national security adviser H.R. McMaster—water turned to memes as the world laughed and laughed at some tremendously awkward photo ops.