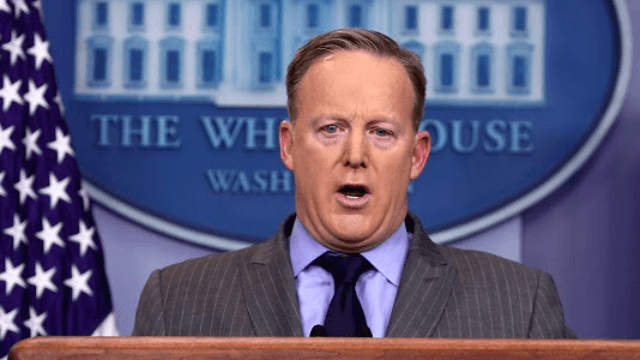 Sean Spicer has officially exited the Trump Administration, much to the excitement of the White House gardeners. So what does to former Press Secretary of a president who's redefining media have to say about his job? Not much, it turns out. Spicer gave his first post-resignation interview to Fox's Sean Hannity on Friday night, and he pretty much used the platform to complain about Melissa McCarthy's portrayal of him on 'SNL.'

In an interview that aired Friday night on Hannity, Spicer admitted, "I'm a prankster, I like a good joke. I think when it's funny, it's funny," but added, "Sometimes it goes from funny to mean."

As noted by The Hollywood Reporter, Spicer doesn't seem to have a sense of humor about McCarthy's beloved screaming, spitting, water-gun toting caricature. "I think that there were parts of it that were funny, but there's a lot of it that was over the line," Spicer told Hannity. "It wasn't funny. It was stupid, or silly, or malicious." Here's where you're wrong, buddy: It was definitely funny.