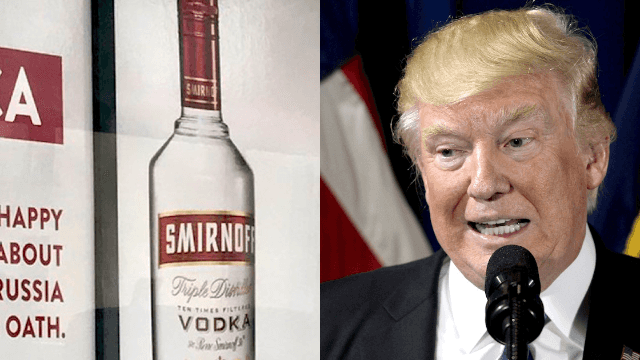 Smirnoff trolls Trump with savage billboard ad. As if you needed another reason to love vodka.

If you weren't planning on drinking vodka tonight, this might change your mind: Smirnoff Vodka has joined the ranks of businesses trolling Donald Trump with this beautifully savage billboard, which someone spotted and shared on Twitter. It's now going viral.

"That's a good burn there, Smirnoff," wrote someone named "Kate," who says she spotted the billboard on a commuter rail platform in Harlem, NYC.

Metro-North (NYC commuter rail) platform in Harlem. Saw it when we pulled in the station.

The deliciously brutal ad features a bottle of vodka, a tin cup containing a classic Russian cocktail called a "Moscow Mule." And it reads, simply:

Made In America. But we'd be happy to talk about our ties to Russia under oath.