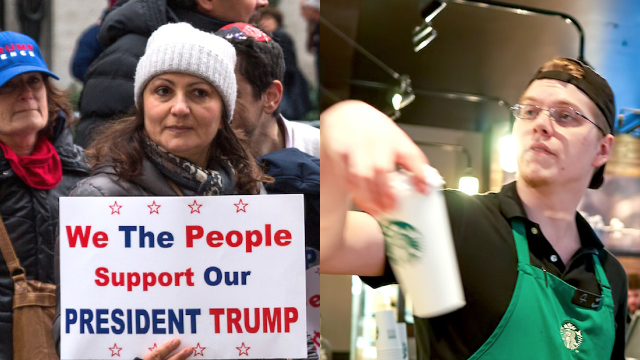 Starbucks customer says she was 'bullied' by baristas for wearing a Trump tee-shirt.

Starbucks baristas love to write whatever their hearts desire in place of the "name" on your coffee cup. And most customers just laugh it off. But when a customer named Kayla Hart walked into a Starbucks outside Charlotte, North Carolina, last week, she was not at all amused by the words scrawled on the side of her Venti Iced Green Tea.

Hart was wearing a Donald Trump tee-shirt when she entered the Starbucks, Fox46 reports, and claims she was "mocked" and "bullied" as a result.

"They shouted out build a wall and shoved a drink at me and then all the baristas in the back started cracking up laughing," she told Fox46. "I just walked out because everyone was staring."

A photo of her drink order was shared with Fox46, and this was the "name" written on the cup: