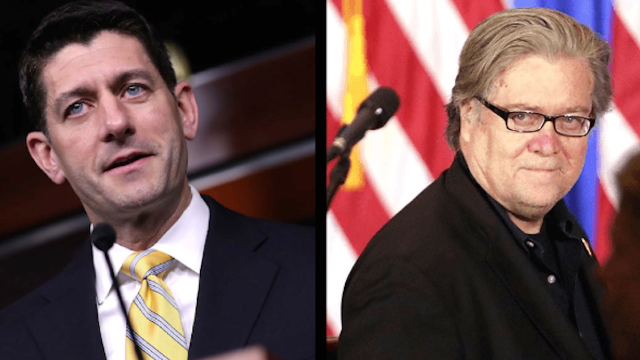 Steve Bannon allegedly called Paul Ryan something we're not allowed to write in this headline.

In his new book, Bloomberg journalist Joshua Green shows just how much Donald Trump's chief strategist Steve Bannon hates Republican Speaker of the House Paul Ryan. Called Devil’s Bargain: Steve Bannon, Donald Trump, and the Storming of the Presidency, the book quotes Bannon as having called Ryan a "limp-dick motherfucker who was born in a petri dish at the Heritage Foundation" (a conservative think tank), according to Yahoo News.

The insult was made at the headquarters of Breitbart, the right-wing publication of which Bannon was formerly chairman. He called Ryan a "limp-dick motherfucker" when he found out that Republicans were thinking of trying to make Ryan the 2016 Republican presidential nominee at the Republican National Convention.