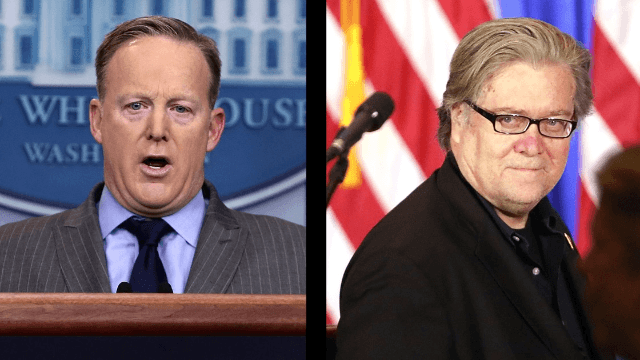 Steve Bannon says Sean Spicer hasn't been on TV because he "got fatter." Pot meet kettle.

If you have been missing the dulcet tones of Press Secretary Sean Spicer lying through his teeth during press briefings lately, White House chief strategist Steve Bannon has a good explanation as to why he has been off TV for a while—"Sean got fatter."

Bannon gave the three-word explanation in the form of a text to The Atlantic amidst rumors that Spicer will step down from his post as Press Secretary. According to The Atlantic:

Neither Spicer nor deputy press secretary Sarah Sanders responded to queries about the changes to the briefings. Asked why the briefings are now routinely held off-camera, White House chief strategist Steve Bannon said in a text message “Sean got fatter,” and did not respond to a follow-up.

You know who did respond with a follow-up? Twitter.