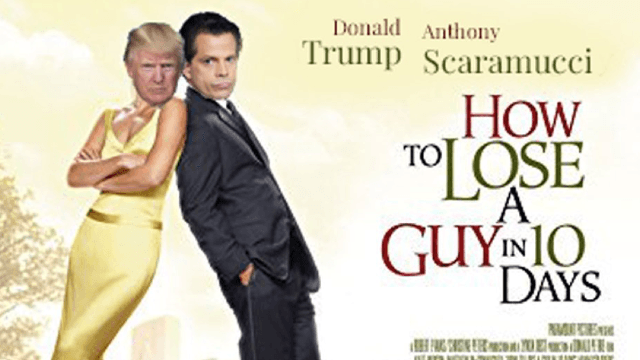 Scaramucci’s sudden firing is bringing out all the ‘How to Lose a Guy in 10 Days’ jokes.

After 10 days as the White House communications director-to-be, Anthony Scaramucci has already been given the boot.

In the past week-and-a-half, The Mooch went through an entire lifetime: he got a new job, he had a baby, his marriage ended, and he lost said job. But what the internet can't help but focus on is how fitting a time span of 10 days feels, thanks to a little 2003 rom-com by the name of How to Lose a Guy in 10 Days.

If you're not familiar with the flick, it stars Kate Hudson and Matthew McConaughey in their early-2000s prime as two young professionals in a relationship based on some uncomfortably devious lies. The movie's catchphrase is literally, "One of them is lying. So is the other." How appropriate for today's political climate.

And of course, the internet nailed it with How to Lose a Guy in 10 Days jokes.

Box office results are in! The #1 comedy in America!

i've never been more ready to use my skills. pic.twitter.com/E17WMhaKty

In 10 days, Anthony Scaramucci: got a job
had a baby
ended his marriage
lost a job