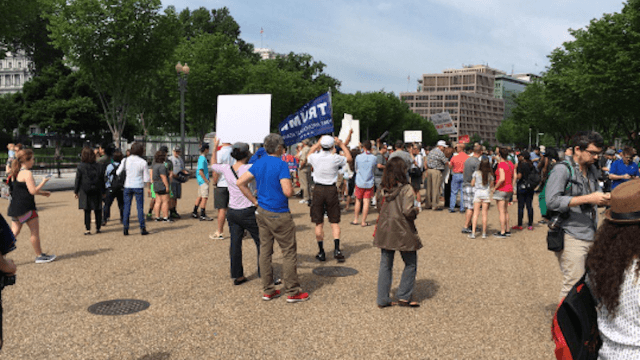 The 'Pittsburgh Not Paris' rally was a major flop—and Trump skipped it to play golf again.

After announcing that he would pull the U.S. out of the Paris climate agreement that most Americans approved of, President Trump made the now notorious statement, "I was elected to represent the citizens of Pittsburgh, not Paris." Aside from that making no sense whatsoever, the mayor of Pittsburgh himself scolded Trump for the comment, saying his city would continue to honor the agreement.

So when the White House wanted to hype a "Pittsburgh Not Paris" rally to thank Trump for the disastrous decision, they knew they couldn't actually do it in Pittsburgh. Instead, they held it in a Washington, D.C. park named for—get this—a French war hero. Just beautiful messaging there, guys.

A Trump campaign “Pittsburgh, not Paris” rally … in a park named for the Marquis de Lafayette, French hero of the American Revolution https://t.co/rkn8VG2n3s

1. Lafayette was a) French, b) would consider Trump a cowardly boor;

2. Pittsburgh went 75% for Clinton and supports the Paris deal. https://t.co/t52BtCQpp6