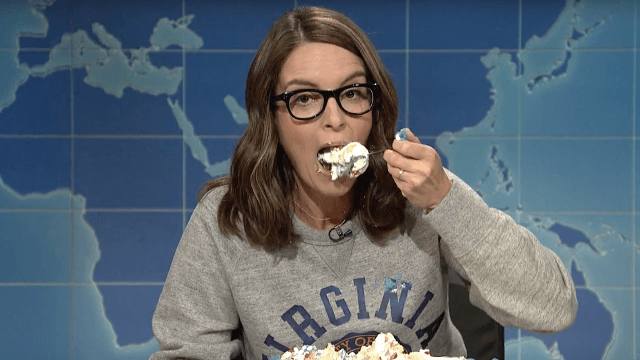 Tina Fey goes off on white supremacy while going to town on a big ol' sheet cake.

"Sheetcaking is a grassroots movement, Colin. Most of the women I know have been doing it once a week since the election," Tina Fey declared on Thursday night's episode of Weekend Update, the Saturday Night Live summertime spinoff. And yes, while she said it, she stuffed her face with a sheet cake.

The actress and former Weekend Update host came on the show to talk about the horrific white supremacy rally that took place last Friday at the University of Virginia in Charlottesville, VA. Fey graduated from the school in 1992 (where she had a great time despite graduating a virgin), and she came to Weekend Update decked out in a UVA sweatshirt. Fey discussed Donald Trump's reaction to Friday's white supremacy rally, the upcoming rallies scheduled around the country, and what we can do to peacefully protest.