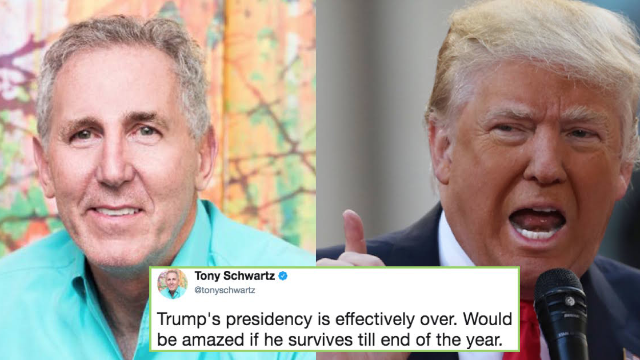 The guy who co-wrote 'Art of the Deal' predicts Trump is about to resign.

Donald Trump’s Art of the Deal co-author Tony Schwartz has tweeted that he thinks the president is going to resign in the very near future.

On Wednesday, Schwartz went off on Trump on Twitter, calling him a "toddler [with] reactive attachment disorder" who has a "deep sense of inadequacy & self-hatred."

He went on to predict that within a matter of months, Trump will be out of office.

The circle is closing at blinding speed. Trump is going to resign and declare victory before Mueller and congress leave him no choice.

Trump's presidency is effectively over. Would be amazed if he survives till end of the year. More likely resigns by fall, if not sooner.

Trump must be isolated. Resistance every day. The end is near but must keep pressure high.

Schwartz thinks that Trump will make a deal for immunity in the Russia investigation in exchange for his resignation. Trump is, after all, very good at deals.