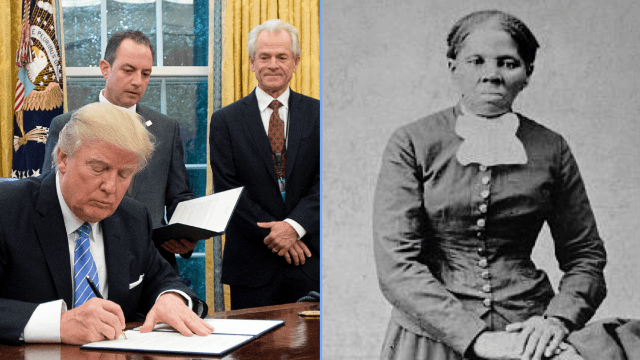 The Trump administration is coming for Harriet Tubman now, too. People aren't having it.

Back when Barack Obama was still the president, the Treasury Department announced that Harriet Tubman, who rescued about 70 enslaved people during the Civil War, would be replacing Andrew Jackson, noted slave owner, on the $20 bill. Not-racist and not-sexist people everywhere rejoiced at the news. However, nearly a year-and-a-half later, the President's Cabinet is comprised of significantly less not-racist and not-sexist people, so are we really surprised that plans to put Harriet Tubman on the $20 bill are being halted?

As reported by CNBC, Trump's Treasury Secretary Steven Mnuchin will not be prioritizing the previously-announced makeover of the $20 bill. When a CNBC interviewer asked Mnuchin if he supported replacing Jackson with Tubman, he said, "Ultimately we will be looking at this issue. It's not something I'm focused on at the moment."

"The No. 1 issue why we change the currency is to stop counterfeiting," Mnuchin, who produced The Lego Batman Movie, continued. "So the issues of what we change will be primarily related to what we need to do for security purposes. I've received classified briefings on that. And that's what I'm focused on for the most part."