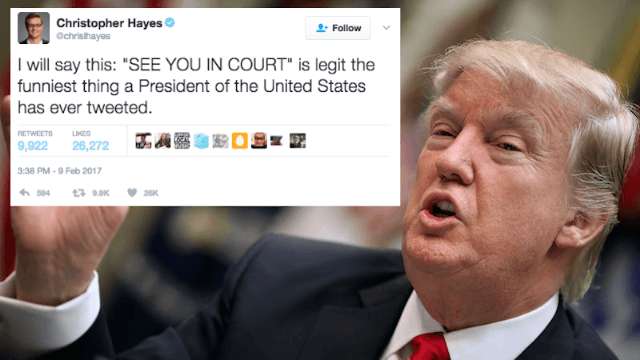 Here are Twitter's funniest responses to Trump's insane 'SEE YOU IN COURT!' tweet.

Today, three federal judges unanimously refused to reinstate Donald Trump's Muslim travel ban. According to The New York Times, the ruling will likely be quickly appealed and taken to the Supreme Court. But before that happens, Trump wanted to have a quick outburst about the results and make sure everyone knew about his intent to appeal:

SEE YOU IN COURT, THE SECURITY OF OUR NATION IS AT STAKE!

See you in court? Didn't you just leave court? And aren't you saying that to the people who are also perpetually in court, as they are judges? The ban was lifted on Friday after federal judge James Robart in Washington State issued a decision that would temporarily block it, and the three judges today unanimously agreed with Robart's suspension of the ban. So first, we must thank Judge Robart and our three federal judge friends from today. But now, it's time to turn it over to the internet, who eviscerated Trump over his insane tweet. First up, we have Hillary Clinton, who issued perhaps the perfect tweet in response to Trump's "SEE YOU IN COURT!"