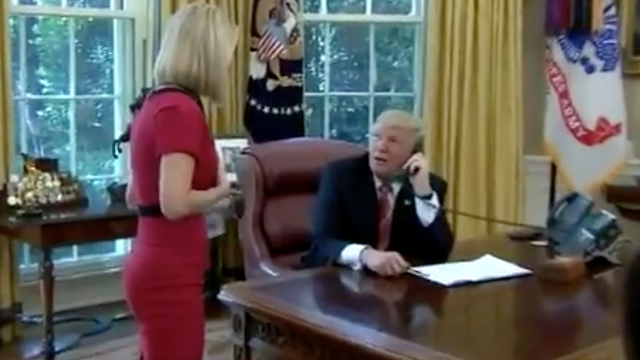 On Tuesday, President Donald Trump made a call to the newly elected Irish Prime Minister, as members of the Irish press in Washington D.C. looked on. As the call began, Trump made the already-strange move of addressing the crowd instead of whoever just picked up the phone. He proceeded to flirt with reporter Caitriona Perry.

Video of the bizarre moment when President @realDonaldTrump called me over during his call with Taoiseach @campaignforLeo Varadkar. @rtenews pic.twitter.com/TMl2SFQaji

"We have a lot of your Irish press watching us, they're just now leaving the room," Trump began his call with Leo Varadkar, the Taoiseach (prime minister) of Ireland.

"And where are you from? Go ahead. Come here, come here," said Trump, pointing to Perry. "We have all of this beautiful Irish press. Where are you from? RTE news? Caitriona Perry! She has a nice smile on her face, so I bet she treats you well," remarked Trump—to who? No one knows.