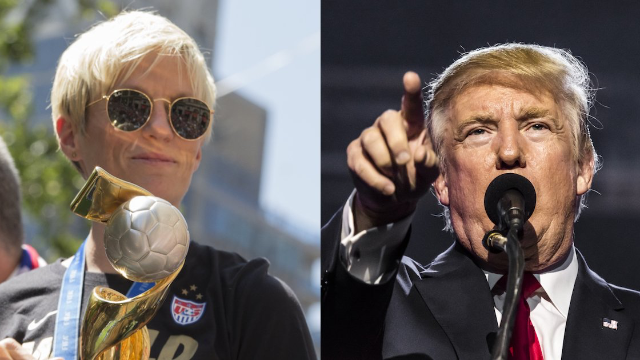 Welcome to the Wild West of 2019. When the deeply-unhinged president is not too busy maybe-kinda-starting wars and then taking it back, he is picking fights with celebrities on Twitter. Recently, he tried to feud with U.S. soccer star Megan Rapinoe. She got under his skin after telling reporters she wouldn't attend the White House if her team wins the 2019 Women's World Cup. Actually her exact words were "I'm not going to the f****** White House. We're not going to be invited."

A clip of her NSFW comments went viral on Twitter because they reflect a real universal MOOD right now.

“I’m not going to the fucking White House.” - @mPinoe pic.twitter.com/sz1ADG2WdT

Yesterday the president responded the only way he knows how: by unleashing an epic, barely coherent rant on Twitter aimed at the women's soccer star. However, he made a classic error and tagged the wrong Megan Rapinoe. He must've realized his mistake since he since deleted the tweets. But not before writer Molly Jong-Fast screencapped them and shared them for the world to remember: