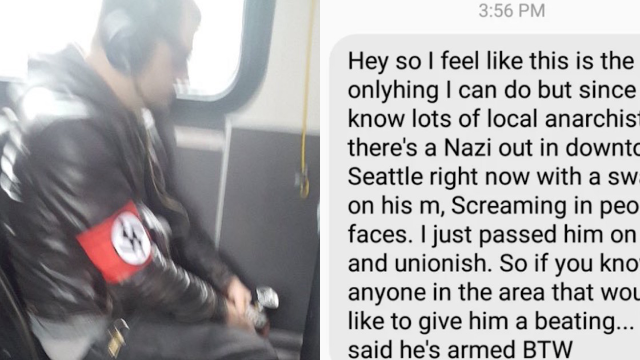 Twitter mobilizes to help anti-fascists track down a Nazi and beat the cr*p out of him.

A group of people known as "anti-fascists" have taken a hands-on approach to the issue of neo-Nazis and white supremacists being loud and proud in public in recent months. By beating them up.

On Sunday afternoon, the internet fully mobilized behind getting a Nazi beaten up. It began when the Twitter account @bigotbasher shared a photo of a man riding the bus in Seattle while wearing a swastika armband.

"Nazi shit head seen on D line headed to downtown #Seattle," they wrote. "Submitter said they were harassing a black man on the bus."