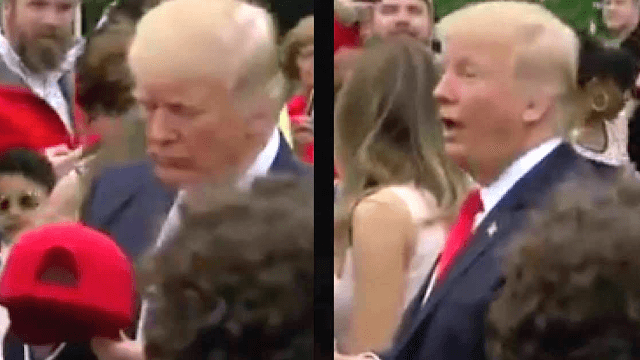 Watch Donald Trump make a kid's dream come true and then literally throw it away.

Today is President Donald Trump's first White House Easter Egg Roll, and DAMN IT, HE IS DOING IT HIS WAY!

According to this video from Politico, a kid excitedly asks the president to sign his "Make America Great Again" hat. Much to the boy's delight, Trump complies....and then proceeds to toss the cap into a crowd of people. Wait, WHAT?

A kid asks Trump to sign his hat at the White House Easter Egg Roll. The president signs ... and then tosses the hat into the crowd. pic.twitter.com/7ExdhpO97H

"No!" shouts the kid as the president smiles. Then HE DOES IT AGAIN!

Twitter was confused. Was he purposely bullying this kid, or did he forget what he was doing as he was doing it?