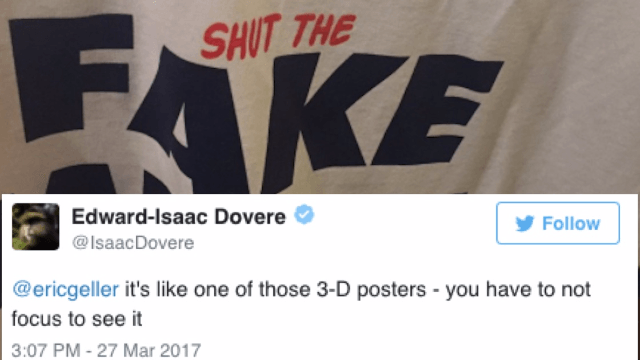 Twitter can't decide if this t-shirt for sale in Trump Tower has a typo or not.

This t-shirt that’s for sale in the Trump Tower gift shop in New York City makes absolutely no sense.

For sale in the Trump Tower gift shop pic.twitter.com/NDuhtTZjQX

Politico's chief Washington correspondent Edward-Isaac Dovere tweeted the picture of the t-shirt, which reads "shut the fake up media."

Wait. Is the shirt meant to say, "Shut up the fake media" or perhaps "Shut the fake media up"? Is it meant to be some kind of word play on "Shut the f*** up, media"? In that case, the shirt is missing a comma. No matter what the intention was for this t-shirt, something definitely got lost in translation.

Of course, Twitter had a few thoughts (and a few jokes) on the matter: