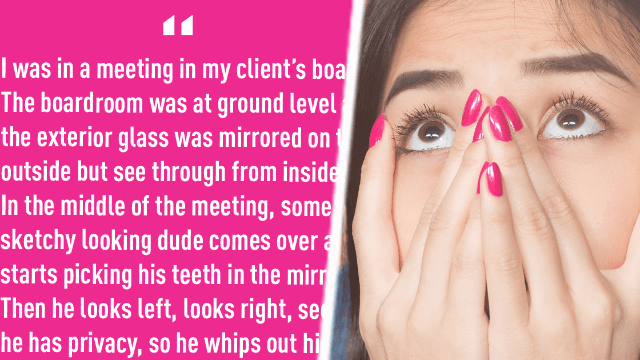 15 stories of things people did when they thought no one was looking.

We've all got our embarrassing moments, those mortifying memories that our brains remind us of late at night when we can't fall asleep. Are you thinking of one of yours right now? Great. Now, imagine what it's like on the other side—it's only an embarrassing moment because somebody saw what you did.

It's not as horrible for the witness—just funny. Some people who were there for somebody else's low point got on Reddit to talk about those times, which they won't soon forget.

1. athena_m13 witnessed what appears to be an old-timey silent film, but in real life.

I was in college and it was a very rainy day. I was late to class and happened to see a guy with a pretty heavy looking backpack, looking like he was going to jump off a diving board. He was rocking his arms, bending his knees enough to look like he was gonna sit down for a shit and everything.

Instead of walking around it, he was trying to jump over a huge ass puddle. I watched him prep himself for a good 20 seconds..which was probably way too long to be staring at someone.

He attempted said jump, slipped backwards due to his huge backpack, and got absolutely soaked. I feel bad saying I laughed quite hard.