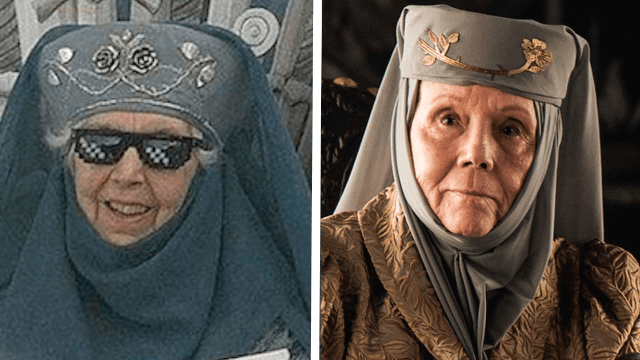 Grandma's 'GoT' Olenna Tyrell cosplay is the only thing fiercer than the Queen of Thorns.

You're never too old for cosplay, as it turns out. Take, for example, this 87-year-old grandmother whom BuzzFeed identified as "Beverly from Georgia." She stole the show (and the hearts of the other attendees) when she showed up at Dragon Con decked out like Lady Olenna Tyrell from Game of Thrones.

Goals: This 85 year old at #DragonCon17. Cosplay for life! pic.twitter.com/jsgfdhEBnU

This actually isn't the first year that Beverly has attended Dragon Con—according to BuzzFeed, she's been attending for years, along with her daughter and granddaughter. Apparently Beverly's daughter made Beverly's costume, and her granddaughter added the "Deal With It" sunglasses idea (extra points for that).