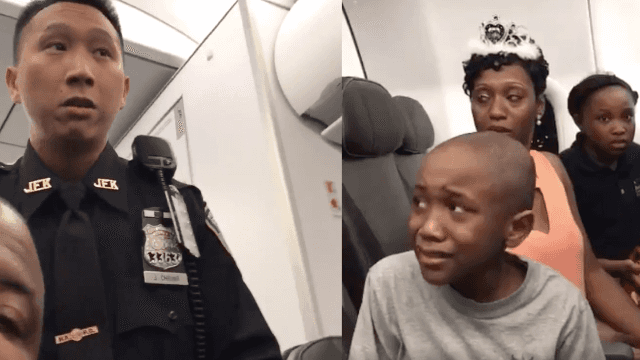 JetBlue accused of booting a family off their flight over a birthday cake.

In recent weeks, we've seen a slew of controversial stories about people getting kicked off airlines. There was the doctor who was dragged off a United flight, these parents who were kicked off their Delta flight, and now there's this family from Jersey City, New Jersey, that was allegedly kicked off their JetBlue flight over a birthday cake. You read that right. A birthday cake.

According to the New York Daily News, Cameron Burke, his wife Minta, and their two kids Cameron Jr. (7) and Camille (9) were on a flight from New York to Las Vegas on May 3 to celebrate Minta's 40th birthday with family. One of their carry-on items was a birthday cake from Tonnie's Minis, a famous bakery in Harlem.

Cameron Burke told the New York Daily News that he had originally placed the cake in an overhead compartment.

"A flight attendant nicely asked me to remove the cake from that compartment, so I moved it to another one," he said.