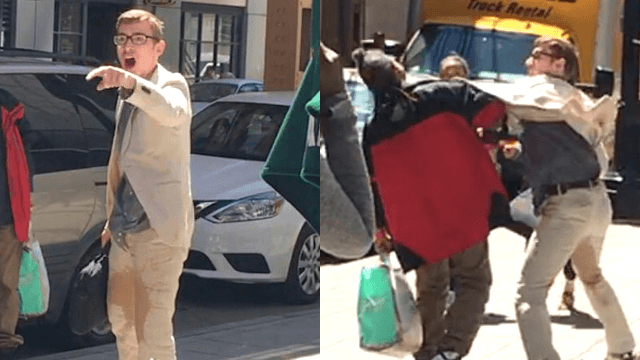 Man goes on racist rant at Starbucks and attacks customers after some coffee spilled on him.

You know when you're at Starbucks waiting for your afternoon unicorn Frappucino, when a little coffee spills on you, so you become a deranged, racist lunatic hurling derogatory slurs, punching and spitting on your fellow customers?

That's never happened to you? Yeah, me neither.

So we're not empathizing with 23-year-old William Boucher, the latest deranged racist to go viral for being a deranged racist. Boucher, who is white (we are noticing a theme), became "irate" after someone spilled a drink on his cream-colored suit inside a Chicago Starbucks on Tuesday afternoon, ABC7 reports. Then things escalated, quickly.

In a video, taken by a local ABC7 photographer who happened to be in the store, the man is heard yelling "shut up slave! Do not talk to me!" at a black man.

He is also seen shouting at a second black man, who is filming him, "your children are disposable vermin!" before spitting on him. Boucher then left the store, and his behavior got (inconceivably) even worse as he allegedly spit on two people and punched a 59-year-old black man in the face, before he was finally tackled to the ground by fellow customers and bystanders and held until cops showed up to arrest him. The victim was taken to a nearby hospital and is recovering.